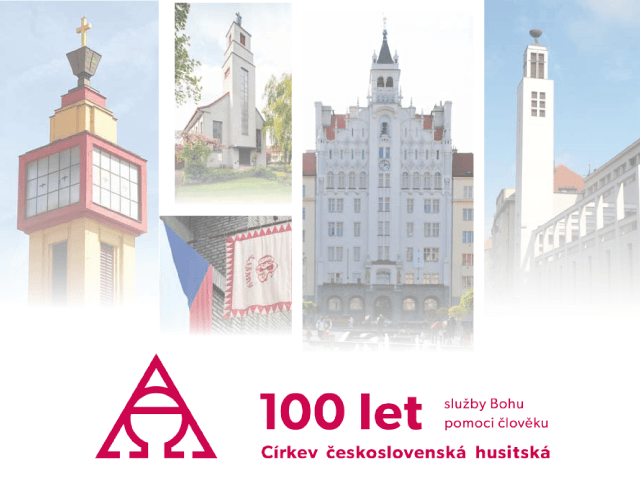 „100 years of the service to God and 100 years of the help to a human.“ Under this motto, the Czechoslovak Hussite Church celebrates 100th Anniversary of its historical birth on 8th January 1920. At a meeting of the reform catholic priests led by Karel Farský in the National House at Smíchov, it was decided about the foundation of the new church of a national character. It was announced on 11th January 1920 in the St. Nicolas Church on the Old Town Square in Prague.

The Czechoslovak Hussite Church professes to the old Christian tradition, Cyril and Methodius tradition, follows the teachings of Master John Huss, the reform efforts, the legacy of Jan Amos Comenius, the modernist movement and the spiritual and humanistic legacy of Tomáš Garrigue Masaryk.

On Saturday 11th January at 2 pm, there will be a ceremonial service in the St. Nicolas Church on the Old Town Square in Prague, which will be broadcast live by the Czech television. The whole congregation of bishops of the Czechoslovak Hussite Church will serve under the leadership of the Patriarch ThDr. Tomáš Butta. CPCE will be represented by General Secretary Dr Mario Fischer.

After the end of the service the participants will place flowers to the statue of Master John Huss on the Old Town Square.

Some of the guests of the world, European and Czech organizations will receive a commemorative medal to 100th Anniversary of the Czechoslovak Hussite Church from the hands of the Patriarch Butta at the following solemn social gathering in the Brožík Hall of the Prague City Hall at the Old Town Hall. In this hall, there are placed the large wall paintings of John Huss at the Constance Council and the Election of Jiří of Poděbrady as the Czech king.

The Czechoslovak Hussite Church expresses its historical journey, contribution and current task in the society in its statement „Church and Society. The word to the 100th Anniversary of CHC.“

„The desire to repair damaged inter-human relationships in church and society led it to democratize church institutions, to involve lay-people in the administration of the church, to translate church liturgies and rites into the mother tongue, to build up extensive social and charitable work, to be active in education, to create works of art, and to carry out other activities, all of which met with a widespread positive response and imbued many of the aspirations of our young Republic … Since the renewal of democracy in a globalized society with a plurality of views, it has tried to carry out more effectively its calling to proclaim the Word of God, to defend Christian values, especially the value of love of God and one’s fellowman, and to build up new forms of social life and inter-human relationships on the basis of those values.“

The full text of the declaration can be found at: www.ccsh.cz